Last checked out by Borrower Name 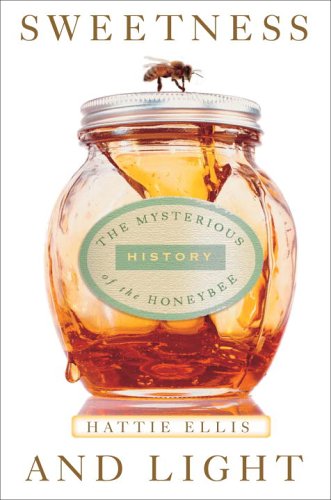 We have chosen to ?ll our hives with honey and wax; thus furnishing mankind with the two noblest of things, which are sweetness and light. --Jonathan Swift (1667-1745) Sweetness and Light is the fascinating story of bees and honey from the Stone Age to the contemporary cutting edge; from Nepalese honey hunters to urban hives on the rooftops of New York City. Honey is nature in a pot, gathered in by bees from many different environments--Zambian rain forests, Midwestern prairies, Scottish moors, and thyme-covered Sicilian mountainsides, to name a few. But honey is much more than just a food, and bees are more than mere insects. The bee is the most studied creature on the planet next to man, and it and its products have been harnessed by doctors, philosophers, scientists, politicians, artists, writers, and architects throughout the ages as both metaphor and material. In colorful, mellifluous language that delights and excites on every page, Hattie Ellis interweaves social history, popular science, and traveler's tales into a buzzing chronological narrative. She explores the mysterious ways of bees, such as how they can make up to twenty-four thousand journeys to produce a single pound of honey, and she takes the lid off the hive to reveal as many as a hundred thousand bees living and working together in total discipline. Great thinkers throughout the centuries have been inspired by bees, from Aristotle to Shakespeare to Charles Darwin to Frank Lloyd Wright, echoing, at every stage, the wider scienti?c discoveries and philosophical movements that have changed our understanding of the world. The unfolding story of bees also transports us into broader areas of historicalexperience: from the Egyptian pharaohs' elaborate burial chambers in the pyramids, the medieval guilds, the berserk drunken rituals of mead drinking, and the Mormons' epic journey west to candlelight in churches, sealing wax, and feast and famine. The bee existed long before man; without bees, the planet and its inhabitants would soon begin to die. This small insect, with a collective significance so much greater than its individual size, can carry us through past and present to tell us more about ourselves than any other living creature.

Go Back | Send this page to a friend

Becoming a member of the Will County Beekeepers Association has a growing list of benefits.
Join Now! or Renew