<- Back to Guest Blogs

First Impressions of the Flow Hive

My name is Darien Kruss. I have been a beekeeper for 6 years, and am a member of the Will County [Illinois, USA] Beekeepers Association since its formation in 2011. I run 8 frame medium boxes on all my hives. In March 2015 I participated in the Flow Hive campaign and purchased three Flow Frames at a cost of $230 plus $38 for shipping. They arrived in February 2016. The following observations are my own. 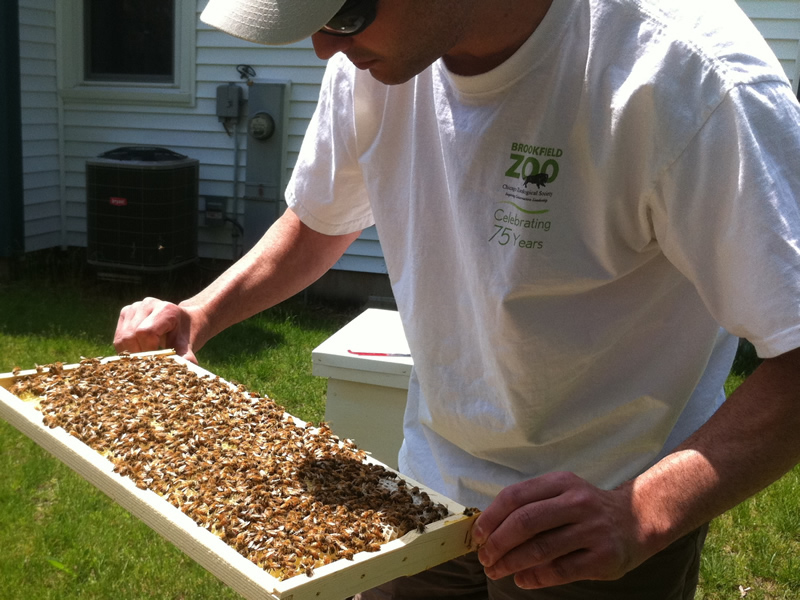 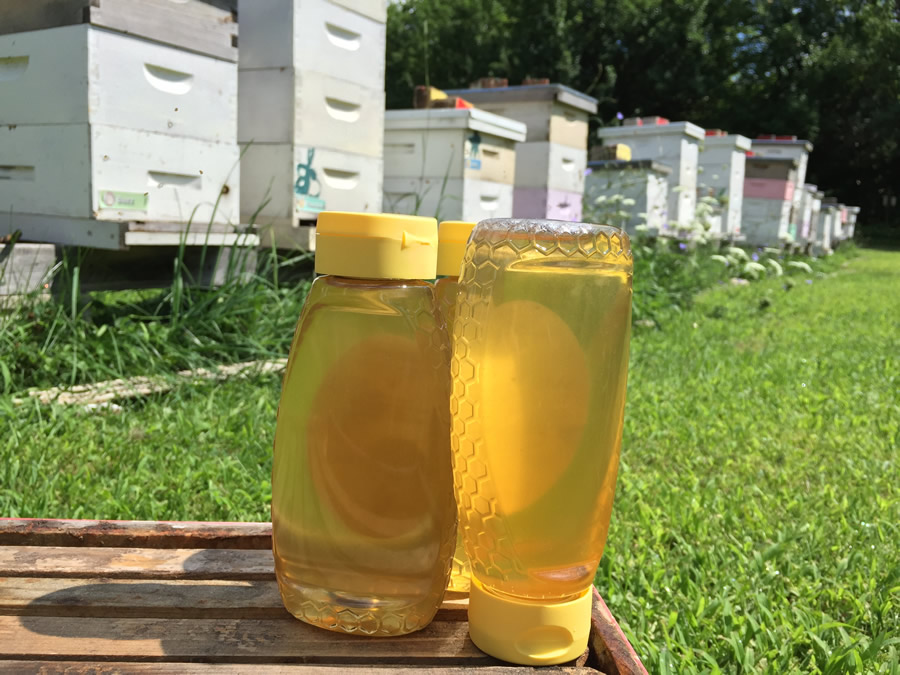 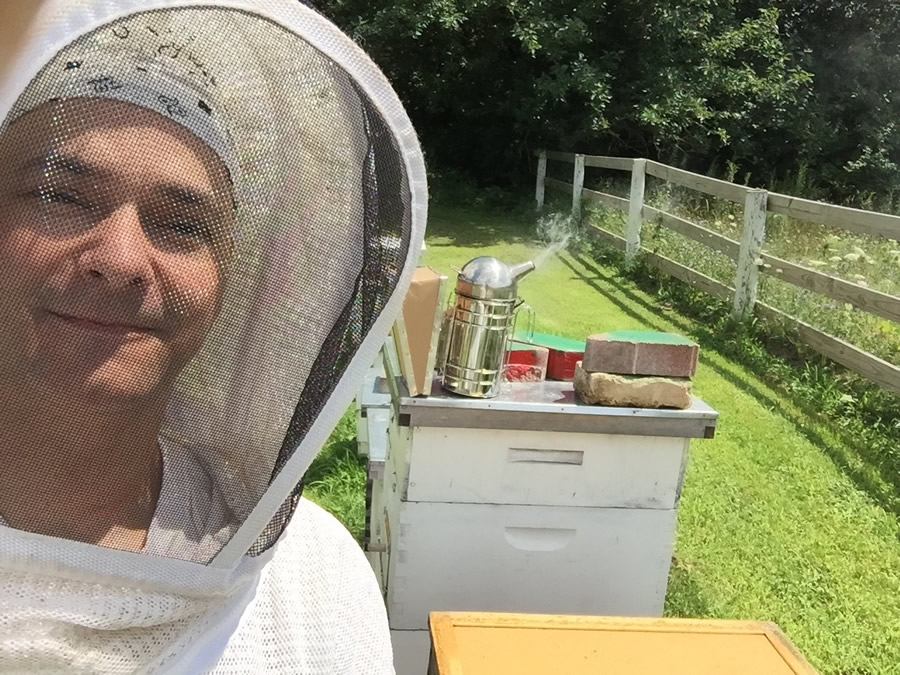 This post is solely for first impressions after using the frames for one complete beekeeping season in Northern Illinois, USA.

Fellow beekeeper Bryan Mathie converted an 8-frame deep hive body to accommodate the three Flow Frames. The box now houses two deep frames on either side of the Flow Frames, and has removable panels to access the key slot and drain pipes. These photos show the box construction. 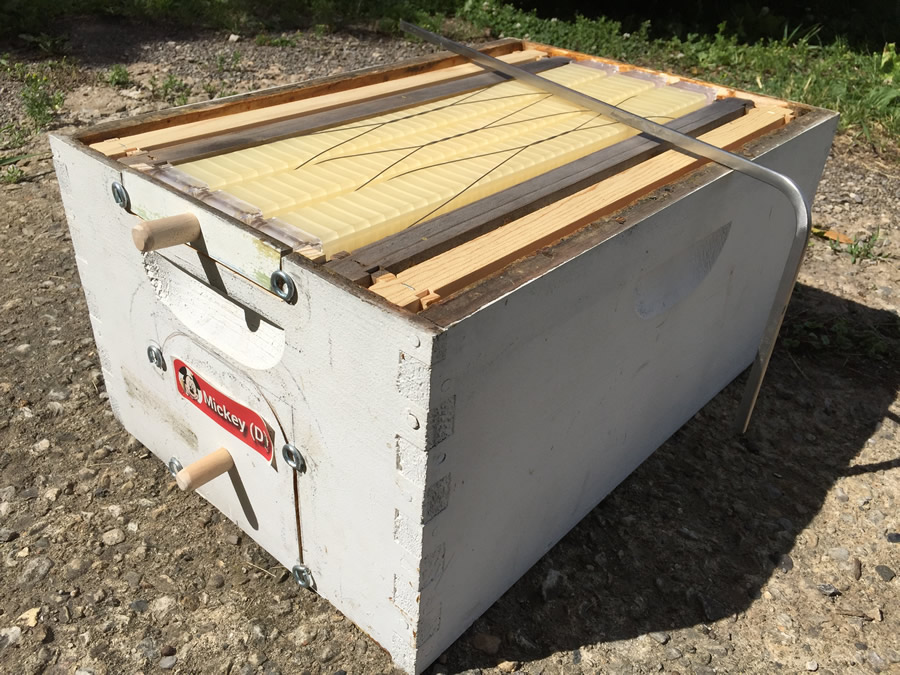 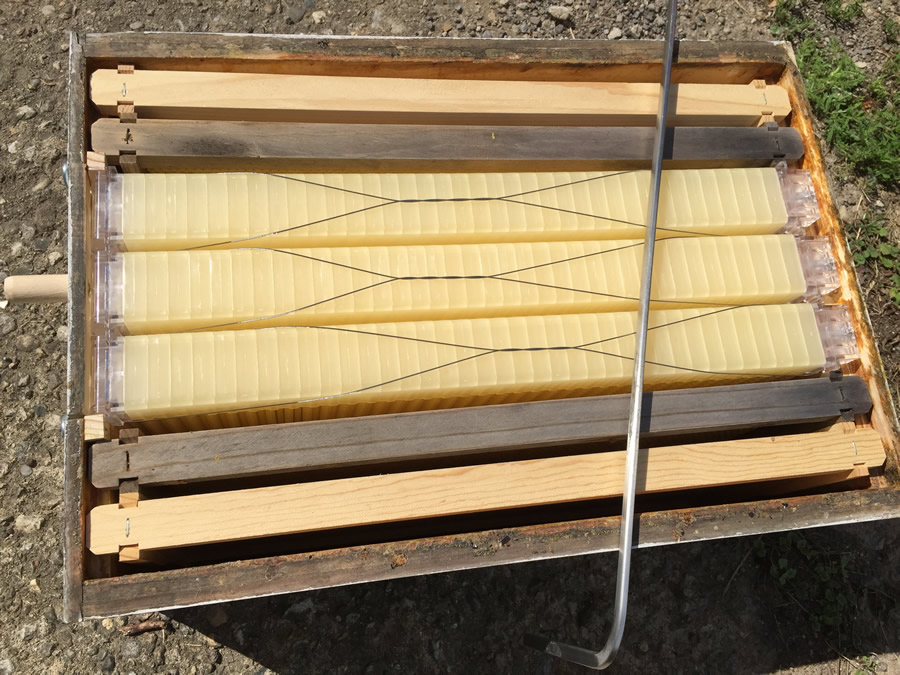 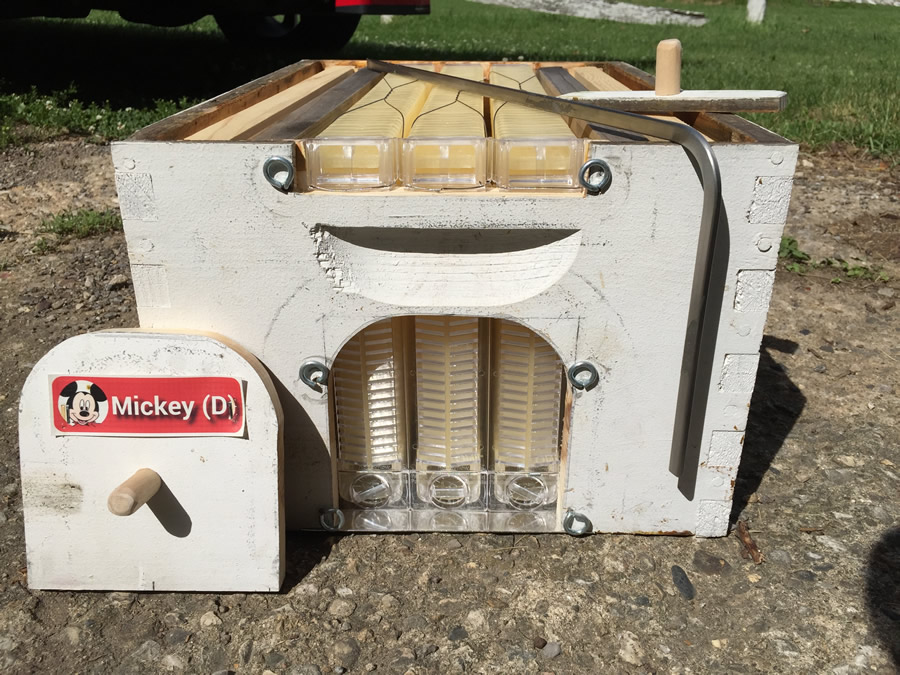 On June 2 I placed the Flow Hive atop a plastic queen excluder on my strongest colony. The hive already had three 8 frame medium brood boxes full of wax and bees, and the nectar flow was starting to come in strong. 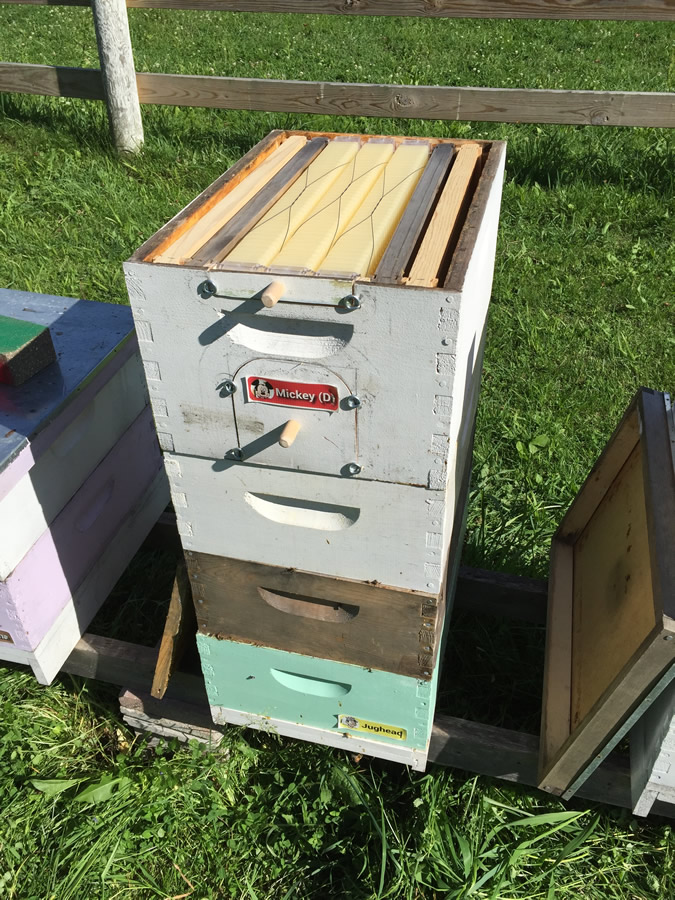 On June 6 (4 days after install) I performed the first inspection of the Flow Frames. I found that many bees were working on the frames, but what they were doing was not immediately apparent. Honey Flow would suggest they were waxing the spaces between cells getting the frames ready to receive nectar. 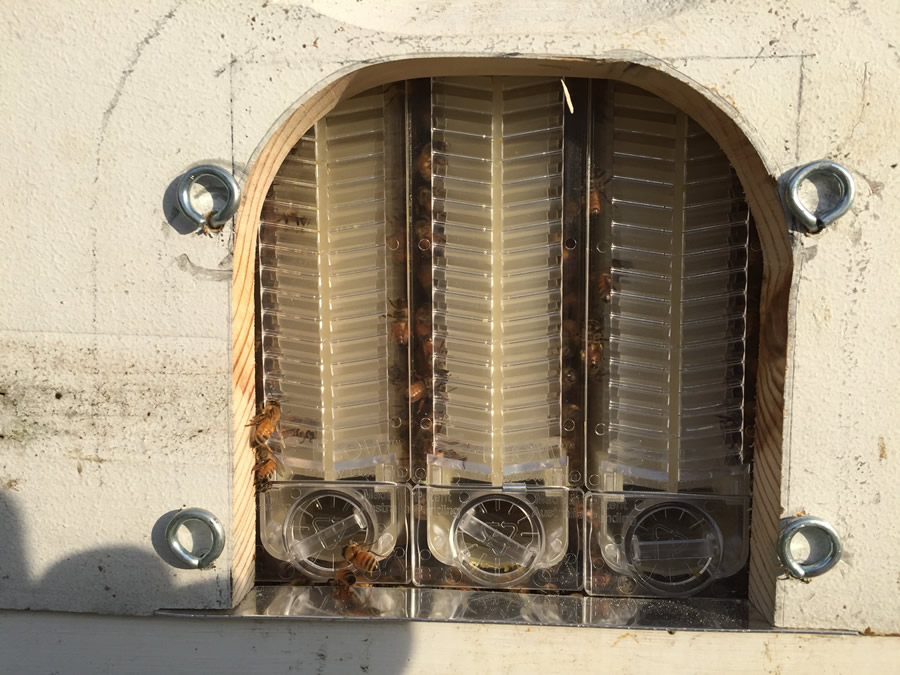 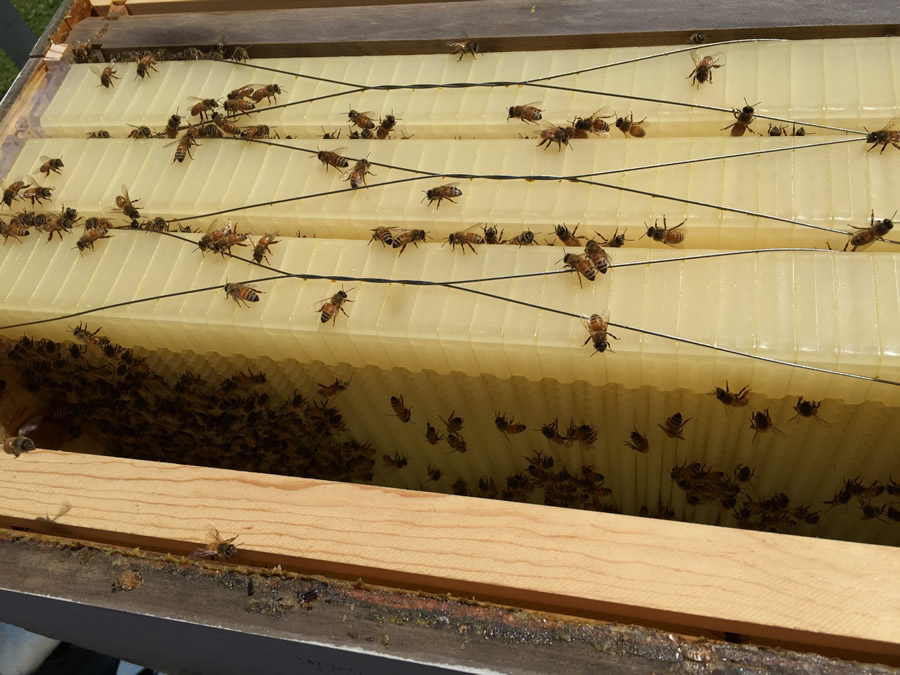 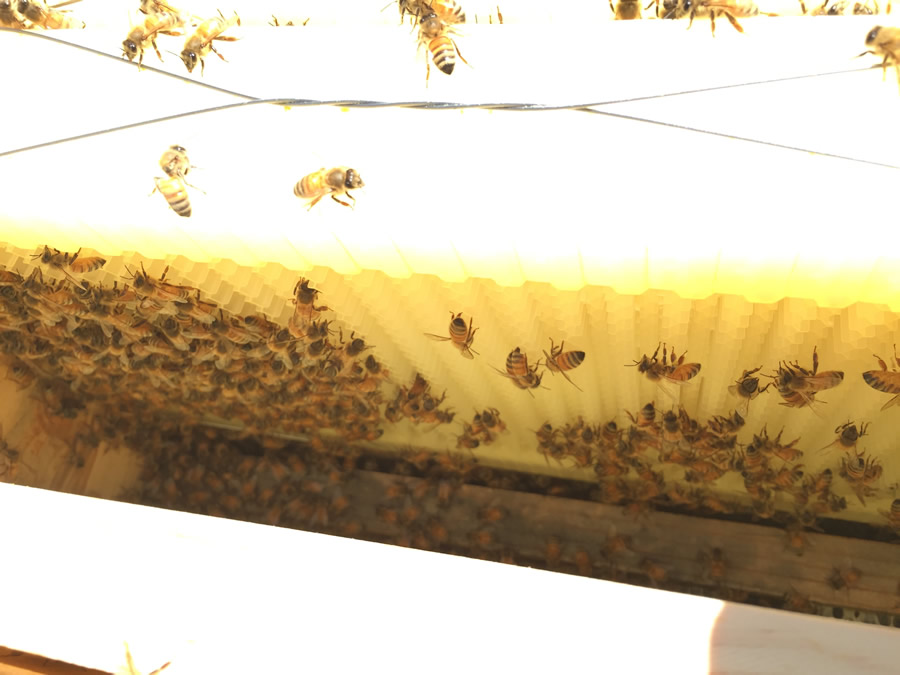 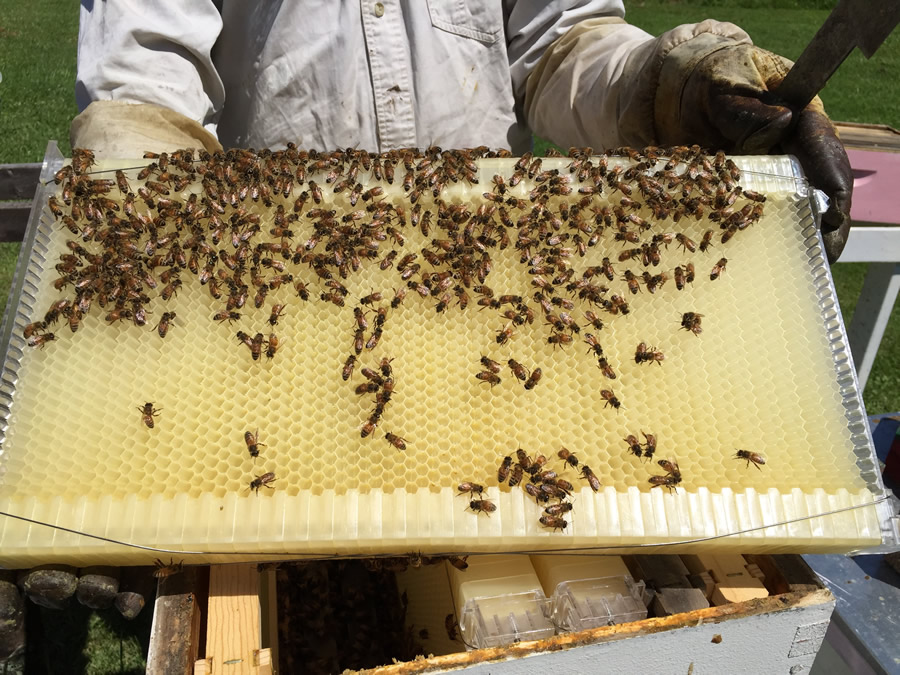 On June 26 (24 days after install) an inspection showed that nearly all cells in the Flow Frames contained nectar, and about one-third of those were capped. Bees were working the frames diligently as evidenced by these photos and the video. 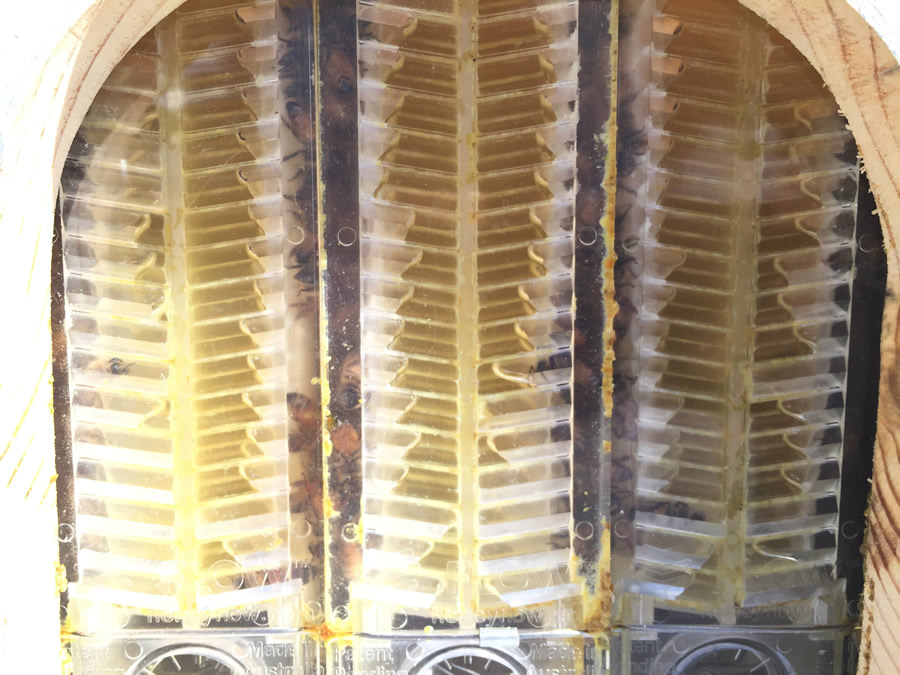 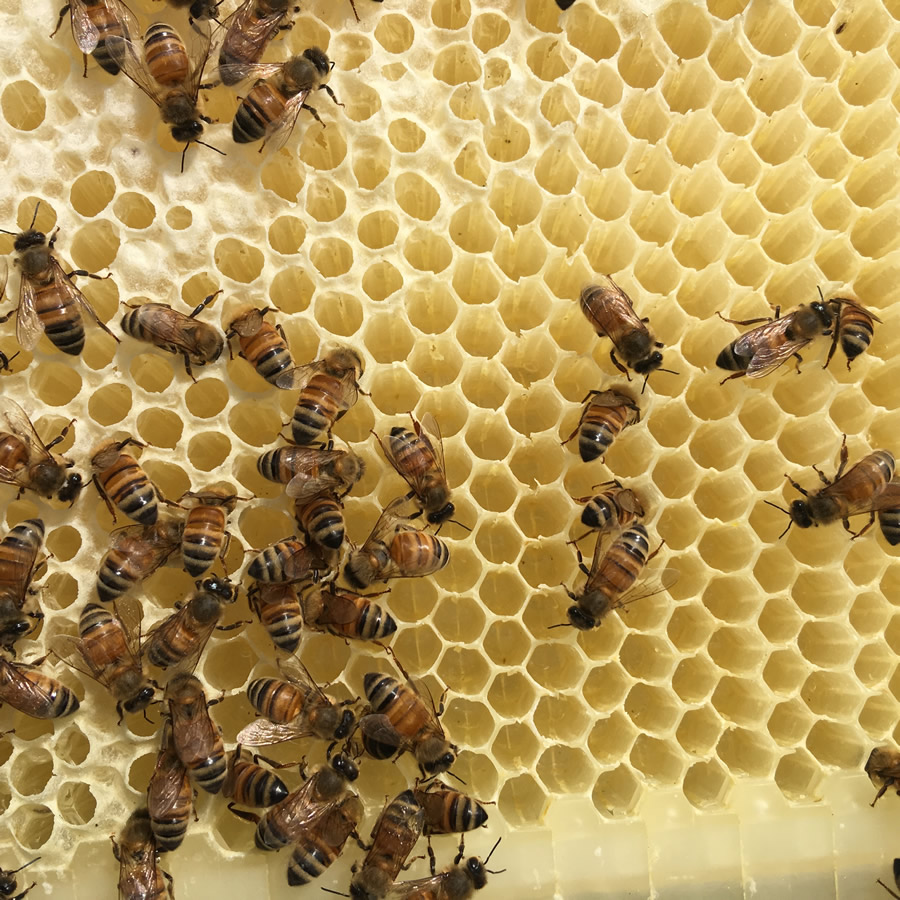 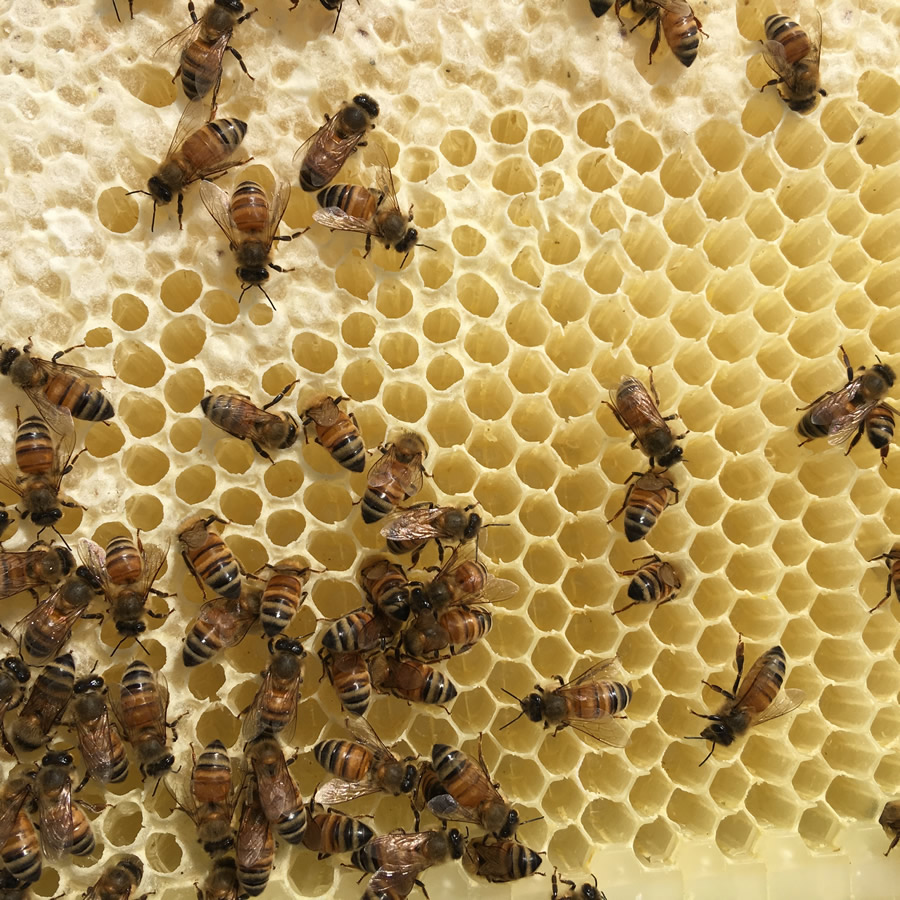 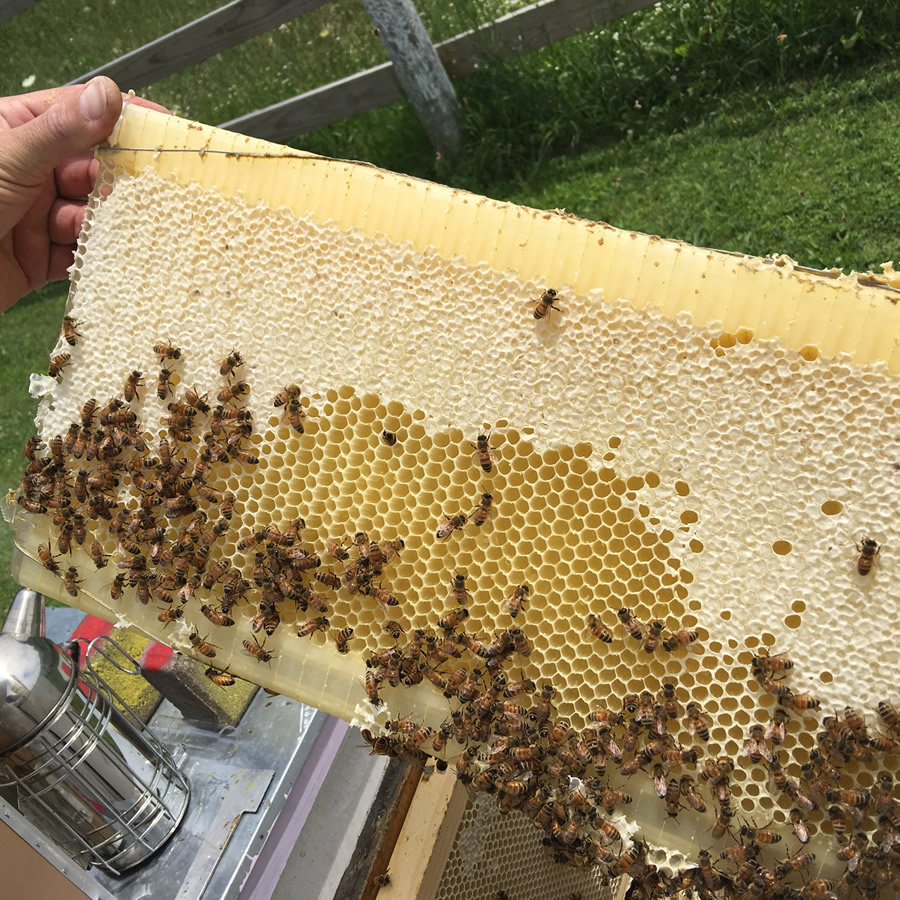 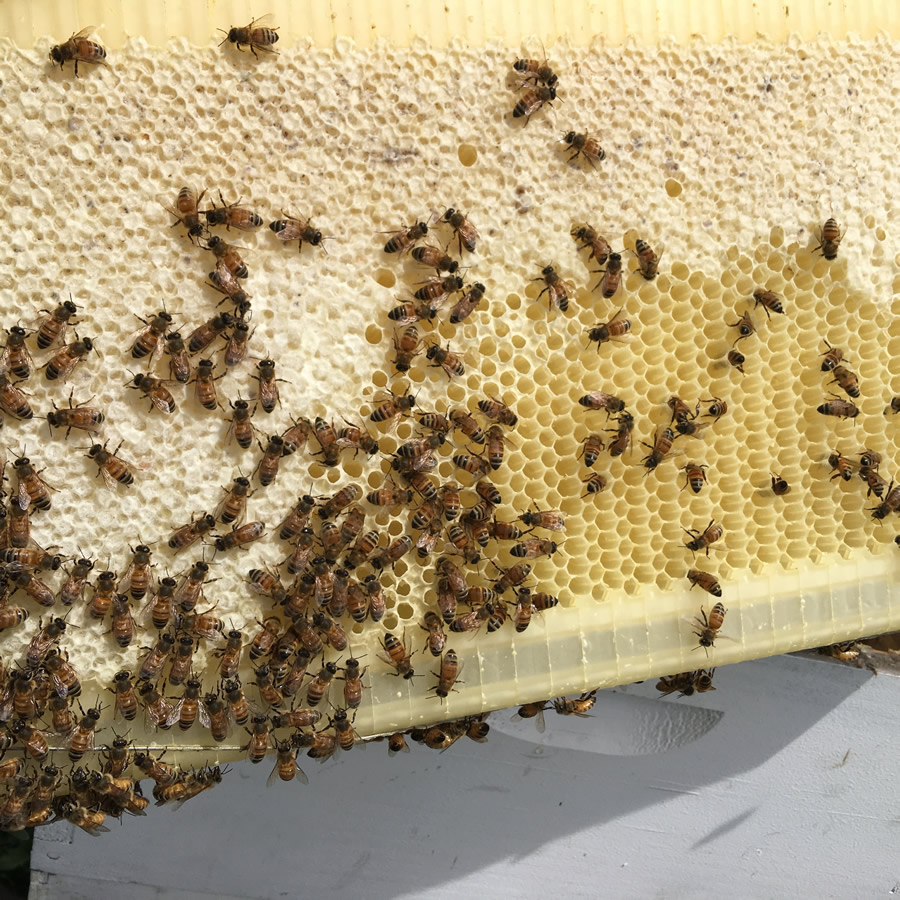 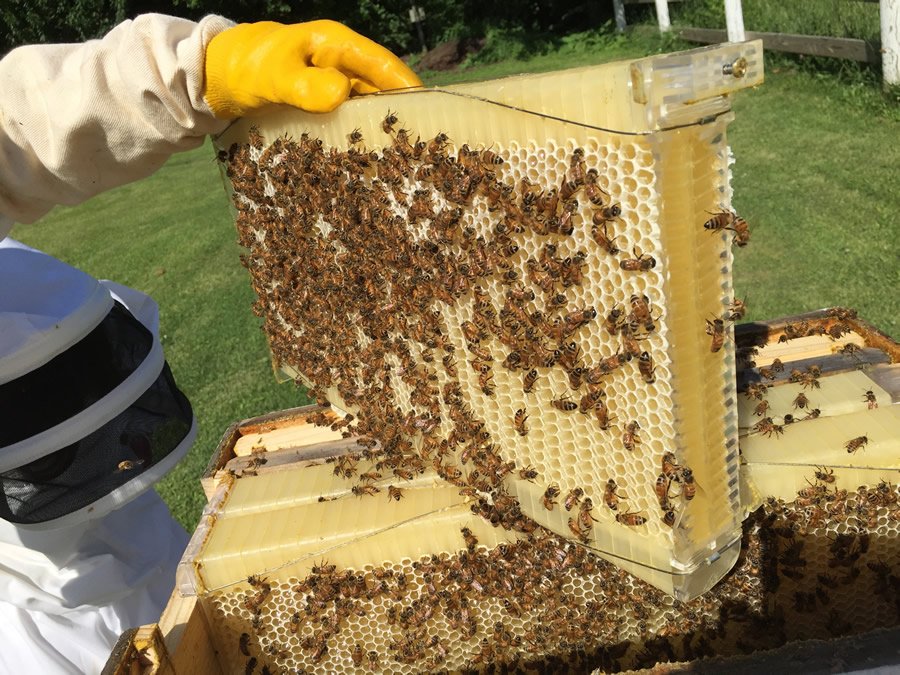 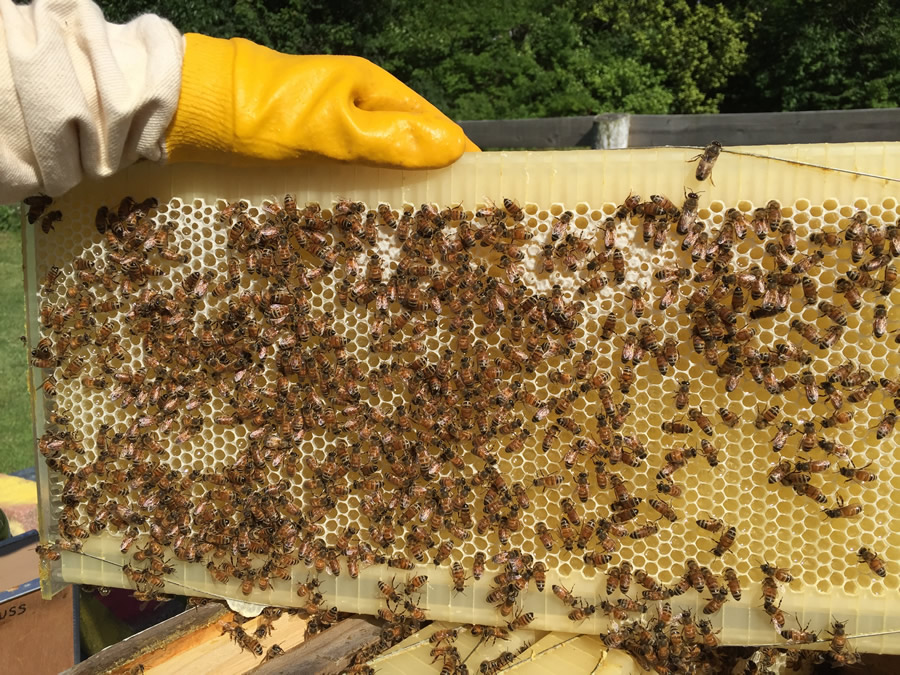 On July 10 (38 days after install) without first opening the hive, and based on the Flow Frames capping status two weeks prior, I performed a harvest following the recommendations by the manufacturer:

A video of the complete extraction can be viewed here: 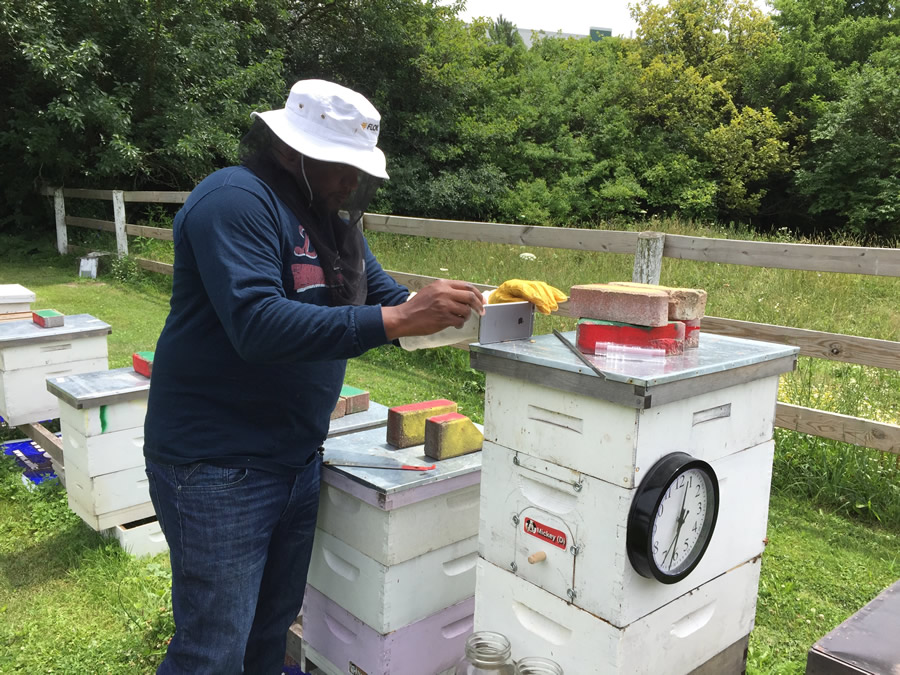 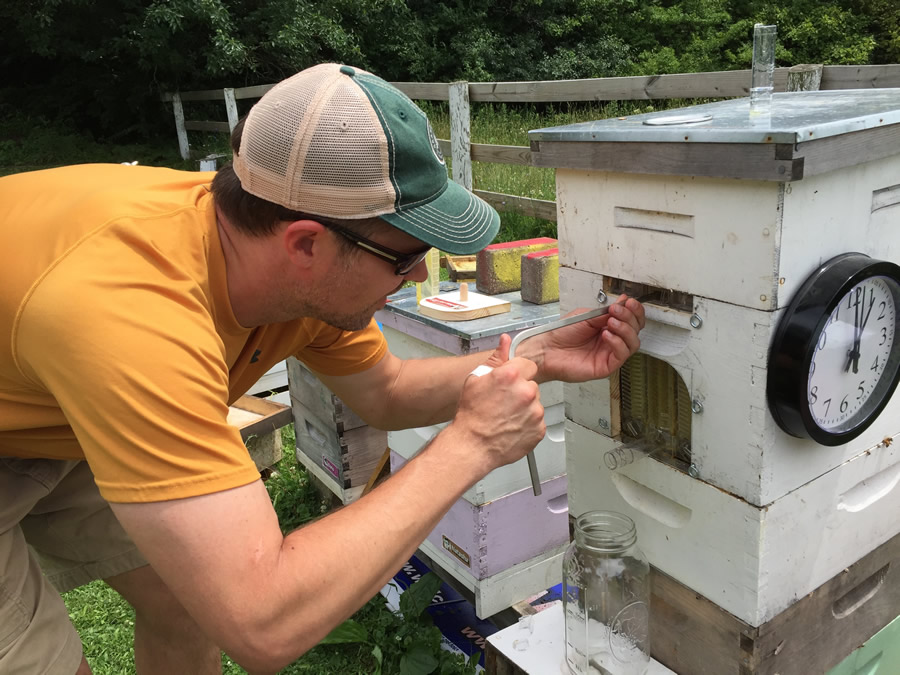 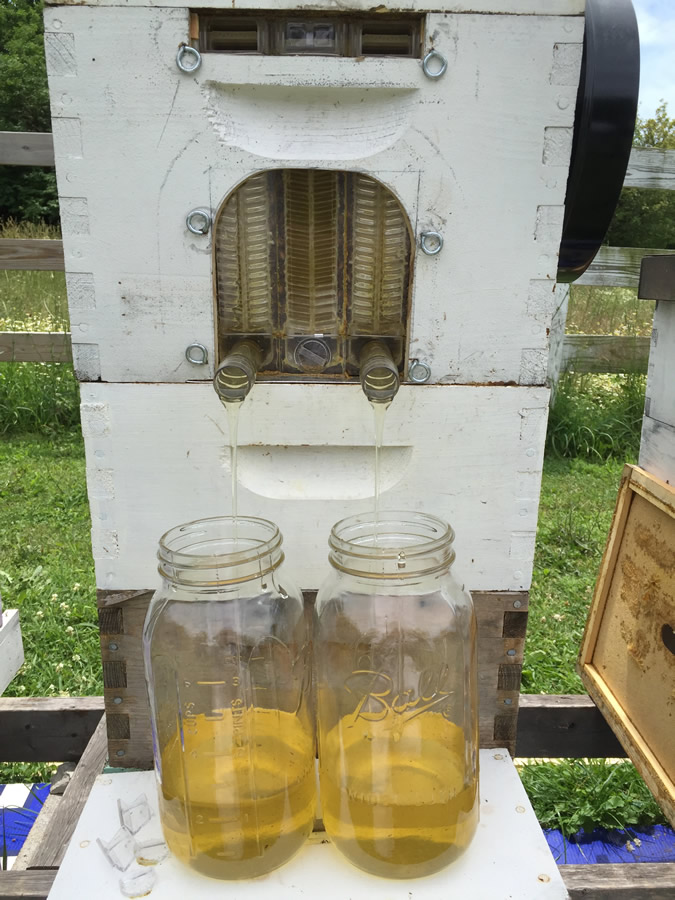 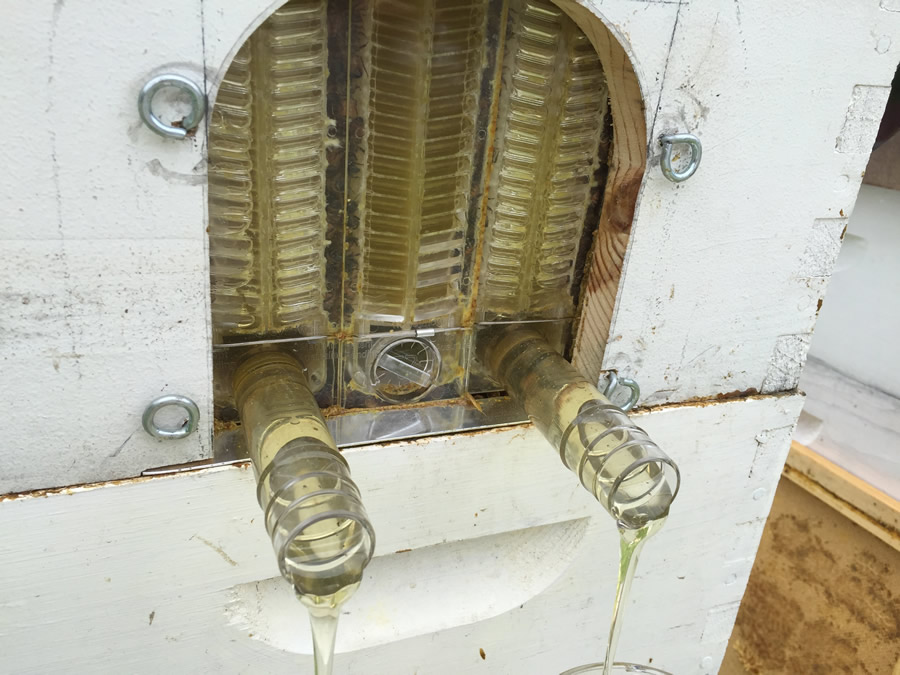 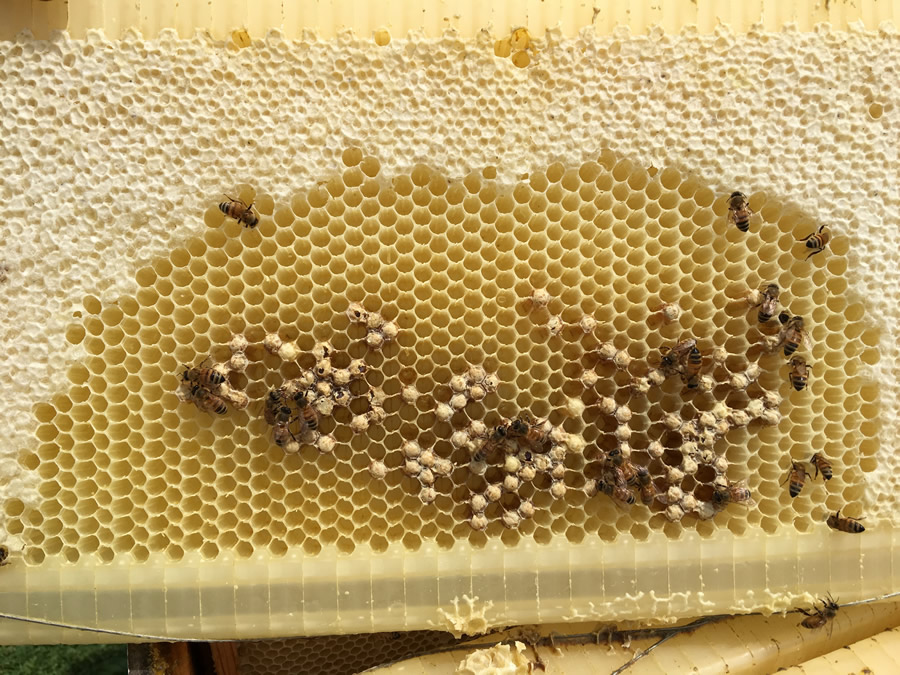 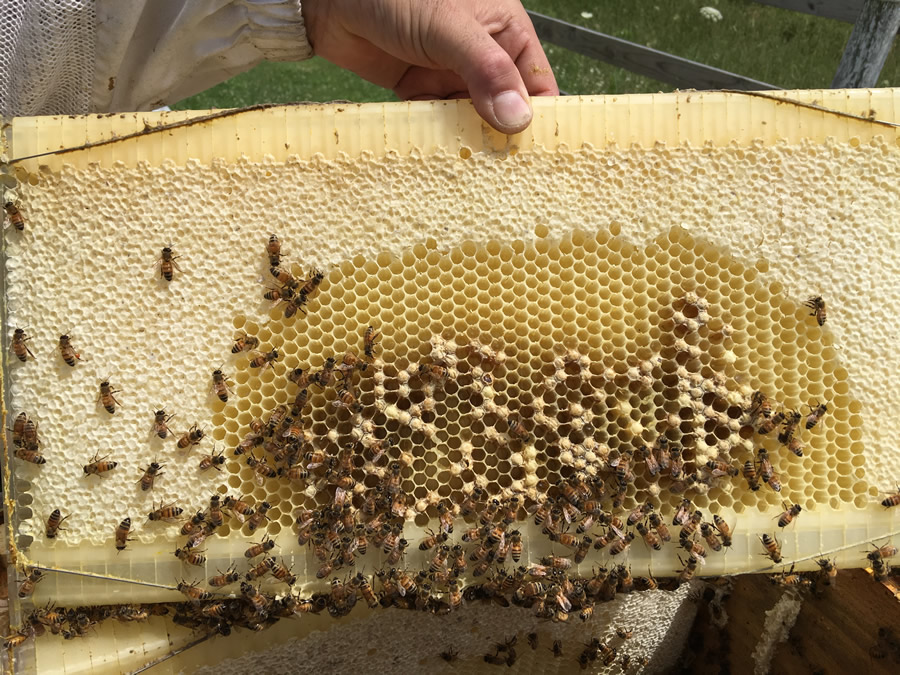 On Aug 14 (35 days after harvest) the Flow Frames were completely empty of honey and barely any bees were working it. A few cells contained trace amounts of nectar. This level of activity corresponded to the standard frames on either side of the Flow Frames. It is unlikely that any more honey will be collected or harvested with the Flow Frames this season, so I will be removing them shortly. 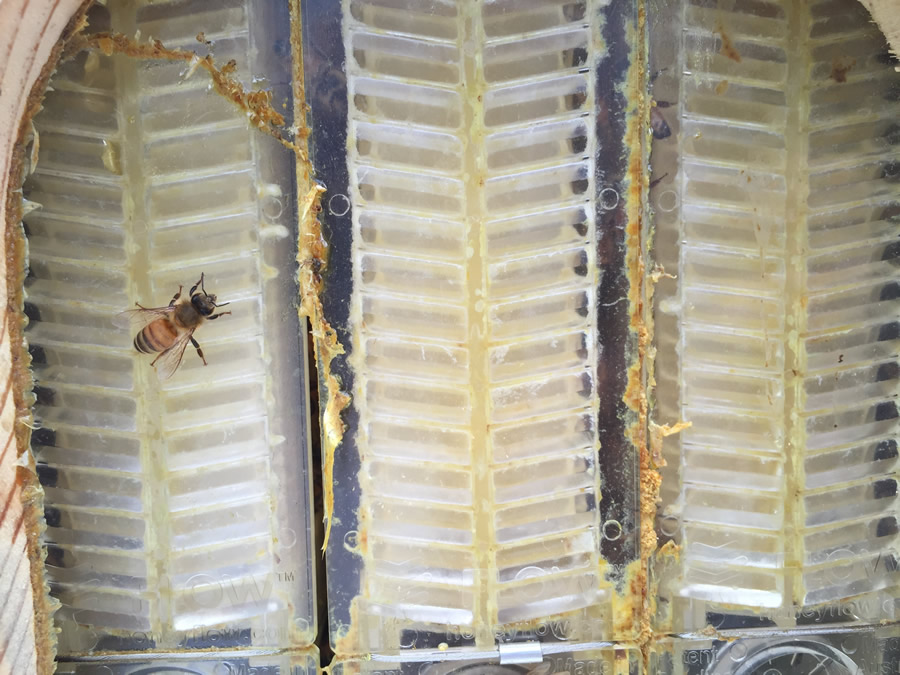 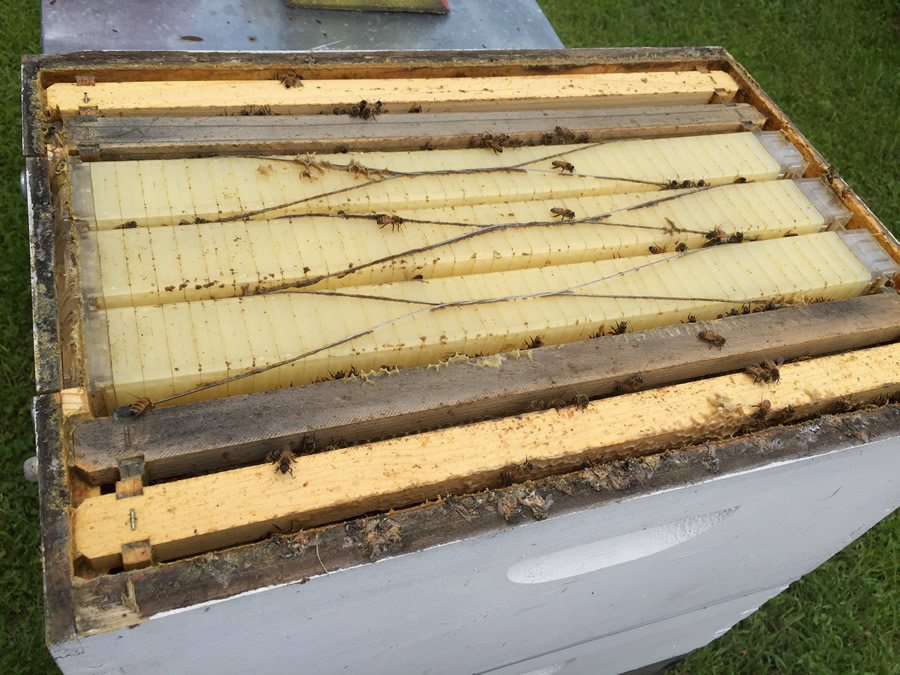 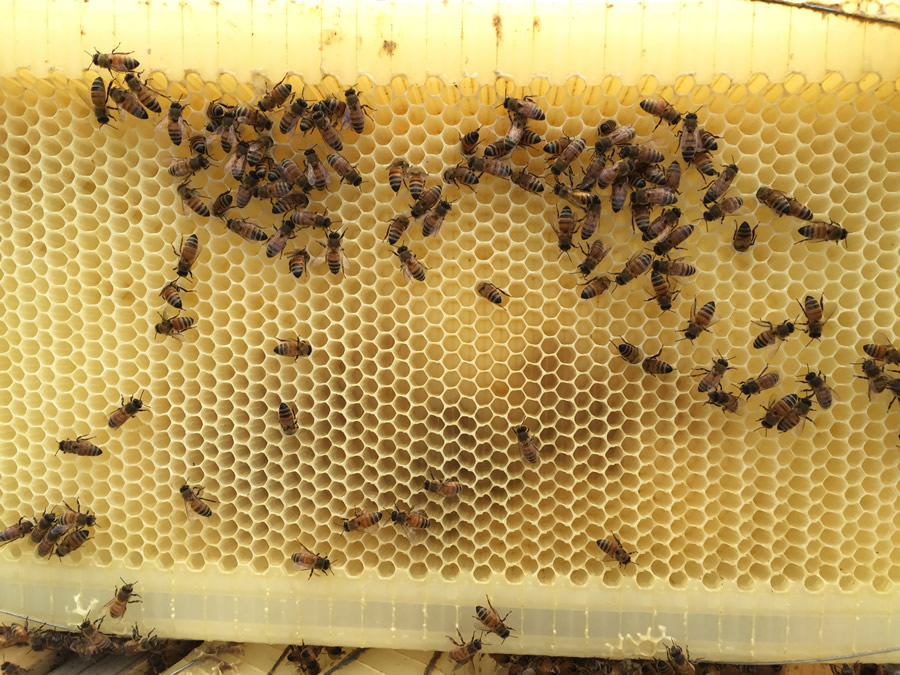 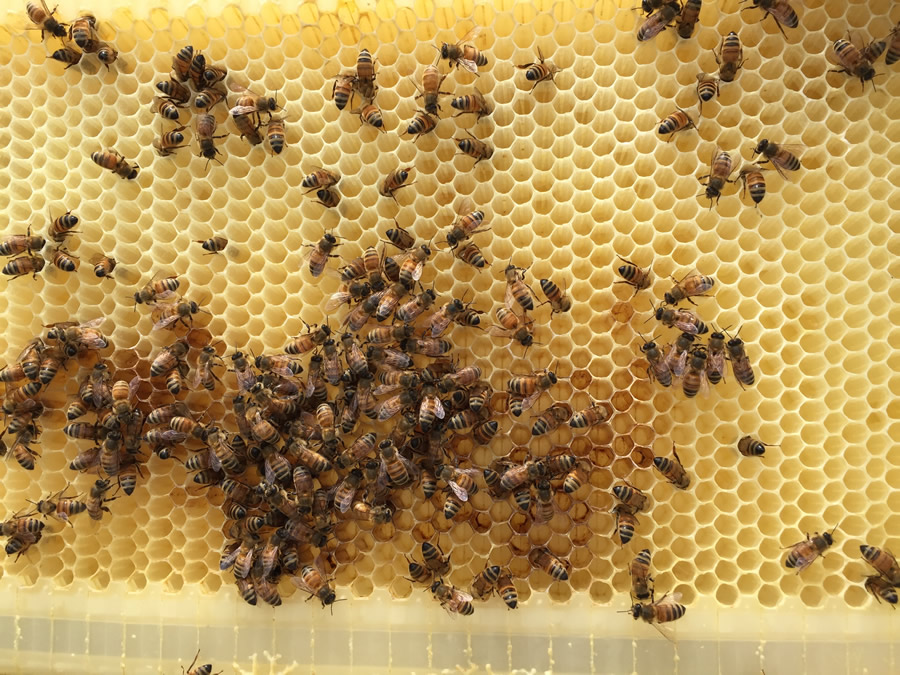 While my own experience with the Flow Frames on this one hive at this one apiary may not be typical, I find the cost of acquiring them to be significant while the benefits received are minimal. I've operated between 2 and 25 hives each year in the last six years, and have invested a moderate amount of money in traditional harvest and extraction equipment and supplies. At my scale of operation, I do not see the Flow Frames to be particularly useful and therefore must label them as a One Trick Pony until I see otherwise.

It is important to note that despite these comments, the Flow Frames do make good on their marketing claims, specifically:

I will put these frames into operation again next year to see how they fare.

I welcome other Flow Hive and Flow Frame owners to post their experiences in the comments. Anyone may post questions and I will attempt to answer them as best I can.

Thanks for sharing your info.
Posted by: darien on August 27, 2016 at 3:20:41 pm
Propylis a problem when you winterize the system this fall? What are the temperature considerations for good honey flow? See any cristalized? How would that be cleaned out?
Posted by: M Ferris on August 18, 2016 at 7:15:05 am
Great factual report, thanks for being so unbiased and leaving no room for guessing. I understand there may be other results by others who have used the flow master, this will be interesting to follow.
Posted by: Denise Proper on August 17, 2016 at 10:37:09 am
Thanks for posting, very interesting!
Posted by: Dundek, Jeff on August 15, 2016 at 9:05:53 pm

Becoming a member of the Will County Beekeepers Association has a growing list of benefits.
Join Now! or Renew